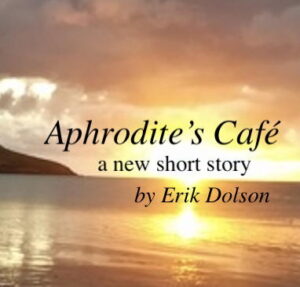 A short read about a woman from Seattle who travels to a beach town, south of the border, to forget a failed marriage. Serenity comes not from hanging on, but letting go.

There are eight chapters, a little over 16,500 words, about 25 percent of a short but full-size novel. It’s a “beach read.” A weekend distraction. There’s no graphic sex, no eroticism, no violence.

Aphrodite’s Café is not available on Apple, nor on Amazon. Those companies control the markets and could possibly make this more of a “success,” but there’s not enough accountibility. This is between you an me.

The story may be purchased for $2.99. If that seems like a lot to you, well, I put hundreds of hours into it and it’s less than you’d pay for a latté at SBux. Paypal will take about 20¢ to handle the transaction. How about we give 30¢ for each copy, a portion of what Amazon or Apple would have charged, to Saving Grace, a woman’s shelter in Bend Oregon? That sounds fair to me.

Push the “Buy Now” button anywhere on this page, and Paypal will let me know that you’ve paid. I will send you a .pdf copy of the story. It’s currently formatted like a paperback, which makes it ideal to read on a tablet. If you need it sized differently, let me know and we’ll figure it out.

The taxi driver opened her door before she’d opened her bag. Scents poured into the evening from baskets of bougainvillea and honeysuckle and jasmine that hung from adobe balconies surrounding the courtyard.

She exited the tired Toyota minivan, stood on her toes and stretched, finding relief from 18 hours of dry stale air in airplanes and airports.

“No señora, no need, for you, tonight, $20,” the driver said, after seeing a $20 bill as she’d rummaged for cash in her purse. She pulled the $20 but held it and stood close to the van’s open door. She’d heard of cabs driving off with the fare and luggage still inside.

A bellman in a burgundy blazer appeared after another moment and pulled her suitcase from the back of the van.

She paid the driver and walked through the grand entrance. The hotel in Bahía de los Santos had been recommended by friends. It was also as far as she could get in one day from Seattle where she lived and worked and until recently, tried to keep love alive.

The slight headache would pass. She’d not had enough water, not wanting to encourage her bladder. If bathrooms on planes were smaller, passengers would have to put them on rather than going in, she thought, and she was size 4. She could not imagine how the man next to her from Texas was able to turn around in there, given that he spilled out of his own seat and onto hers.

More persistent than the headache was the emotional pain she’d been sorting during hours of the flight.

She’d moved everything that mattered out of the Victorian on Queen Anne Hill she’d shared with Brad into a condo down by Pike Place. Even after 12 years, it didn’t take more than a day while he was at work because she’d left behind so much that was only once important, things that had tethered her to a life she no longer wanted.

Also left behind was how joy had drained from her days, like an open jar of honey tipped on its side and noticed too late. After years of Brad’s outbursts; his anger followed by questioning of why she was subdued; after jealousy and suspicion were thrown at her without cause, and after sullen silences that lasted days without explanation. Brad was handsome, successful, and broken.

The relationship had moved from walking on egg shells to avoiding quicksand, even as feelings of near panic and loss begged her to reconsider, then gave way to anger at the years gone, which morphed into fear for the future because she was turning her back on the best option she would ever have, especially at age 50.

After she’d moved out, vases of flowers appeared on her desk at work. They were embarrassing after the first week, as were phone calls so frequently transferred from the front desk when she had turned off her cell phone. A few times at night she answered, but the only result was hours of excruciating recrimination, tears, inducements, promises, indecision.

So she boarded planes that brought her to Bahía de los Santos, to give herself distance and a feeling of finality.

She followed the bellman through a second set of wide doors opened by another man in a similar uniform. The hotel had polished marble floors, tall stone columns, and black iron fixtures with dim yellow bulbs shaped like candle flames.

Above the huge maw of a dark fireplace was a montage that invoked a saint working in a garden at the edge of a sea, no doubt the man for whom the bay was named. From a darkened doorway, she assumed led to the bar, came notes of a single guitar.

French doors stood tall at the other end of the lobby, open to a blueish-green glow that flickered from the swimming pool to the underside of an overhanging eve.

It felt perfect, all of it, just perfect.

The bellman was already at the front desk by the time she’d crossed the lobby. There, a very petit and beautiful young woman with dark hair gathered and pulled down over the right shoulder of her burgundy blazer flashed a brilliant smile.

“Thank you.”  Fingers flying over keys she never looked down to see, Maria M. typed information into the computer.

“Maria, is there WiFi?” the guest asked.

“Oh yes, everywhere in the hotel.” Maria slid a card across the counter that listed access and password. The woman entered that into her phone while Maria M. finished up with registration.

As soon as her phone connected, it came alive with beeps signaling the arrival of email and texts. The woman looked down and frowned. She deleted four texts and two emails…