Seriously? This is the best Democrats can do? Goddamnit.

Where in hell is the wicked smart, 50 to 60 something, experienced enough, visionary, charasmatic man or woman (I really don’t care) to lead my America into the next half century of challenges that face us all?

Hey DNC! Don’t you watch TV or the movies?! There’s your prototype. Find a Martin Sheen or Louis-Dreyfus! Look at the GOP! Their two most popular presidents were a “B” grade movie actor and a reality TV star! Can’t you figure it out?! Liberal bona fides don’t matter. … Read more… →

We often just see the surface of things, the shapes we impose upon the world. Our filters block what we don’t know, or allow in only what we think we know already.

Early one morning waiting in Anacortes for the ferry to Victoria, I decided the broad expanse of dry, empty asphalt would be perfect to practice on my electric unicycle. I just call it my “wheel,” it’s a single wheel 16 inches in diameter with two foot plates on each side. It looks quite simple, covers hiding the complexity of motor, gyroscopes and … Read more… → 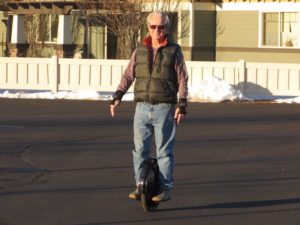 Boeing has released information to airlines on how to convince customers and crew that the 737 Max planes are “safe” after two crashed, killing 346 people. One point made was that passengers are more emotional than rational:

“Every interaction with an anxious passenger, whether face-to-face or online, is an opportunity to demonstrate our care and concern,” the presentation said. “This is as simple as recognition of a passenger’s state of mind. Research shows that emotions drive decision-making, so a human connection will be more effective than rational appeals.”

Perhaps Boeing should focus on fixing the planes … Read more… →

I’d been working on a blog saying that Boeing chief Dennis Muilenburg had to go. Boeing beat me to it. Meulenberg was let go over the weekend before I could publish.

Muilenburg was clumsy through the crisis following the crash of two of its new 737 Max airplanes that killed 346 people. He applied political pressure and embarrassed the Federal Aviation Administration, which delayed grounding the airliner until many other nations had already done so. He repeated “Safety is our number one priority” long after that was obviously untrue. He failed to effectively communicate with his … Read more… →

A friend posted this on his site.

As Clint Eastwood said, “Don’t let the old man in.”

“… Equally important, senators acting as jurors in an impeachment trial must take a second oath as well, required by the Constitution: to “do impartial justice according to the Constitution and laws, so help me God.”

And so senators—especially the Republicans—will face a choice that they should understand goes far beyond politics. They must choose whether to follow the facts, or to follow their fears; to uphold propriety, or to perpetuate partisanship; to champion the truth, or to legitimate lies; to defend the interests of the nation and its Constitution, or the personal interests of one vainglorious man. In short, … Read more… →

Yesterday on December 7 there was a post, by someone whose politics I do not share, about the sacrifice of our fathers in WWII. Later, I read about Eisenhower’s call to duty after Pear Harbor.

Few of our fathers were “professional soldiers,” but they went to war. Friends and brothers lost their lives. Though the navy uniform of my father sits in a chest two feet from where I write, I helped squander his sacrifice and made too few of my own.

I believe we are again at war, but today’s war had no declaration. It seeps into crevices between … Read more… →

Thanksgiving. No reservations available, but there’s seating in the bar. The restaurant has run out of turkey, I decide duck will do. The dish is labeled “Canard Deux Façons,” so that’s what I order. 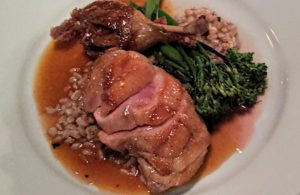 At first, there’s just the surprising way you toss “du rien” over your shoulder while walking away from the table after I say thank you; the speed with which you glide weightless from dining to bar and back, feet barely touching the floor; … Read more… →

Donnie Boastful was at his desk in the Oval Office trying to solve the Tik Tok Toe game in the “Washington Times.” Normally he wouldn’t tolerate an interruption, but it was Ivanka, and, well …

“What can I do for you, you gloriously amazing most wonderful human (from my loins) who ever graced this planet earth in the history of time?”

“Daddy, they say I should give back my China trademarks that I got after our wonderful trip there last summer! Because that bad Biden boy had to quit his job … Read more… →