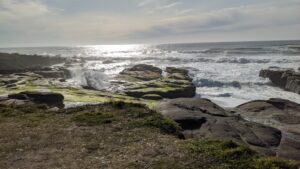 They lied, those who said time heals all wounds. Late in life one realizes that’s just not true. We each carry wounds, mostly as scars perhaps but some still raw and bleeding, into our own grave. Acceptance for those fortunate to find it is in learning to look directly at the lashings, lacerations and lesions without flinching or turning, if not running away.

And without wallowing by spending these precious moments we have left trying to recreate memories burnished by time but that will disappear as soon we close our own eyes one final time.

I carried Jimmie’s ashes on my boat for nearly three years in the zippered plastic bag rolled in pink bubble wrap stuffed into the small stout cardboard box in which they were sent. The box was the size of a large paperback book of about 400 pages, not nearly enough to describe the impact he had on all who knew him.

“Pink bubble wrap? Like I’d be easy to bruise?” he’d chortle, and we’d beat that idea to death for an hour or so.

On the boat the box sat on a shelf above my closet next to the foot of the bed. I didn’t see it every day as it burrowed over time under hats and gloves while waiting for me to carry it to places I’d decided he’d like to return as if the ashes would bring him back like homing beacons, or remind him of this world.

“Homing beacon? Homing bacon would be more effective,” he’d say as I took a sip of morning coffee and I’d choke to avoid shooting a blast of brew out my nose.

Twice I left small spoonfuls of ash against the warm wall where we sat in Victoria basking in a sun that hung suspended for hours in an afternoon sky and waiting for at least twilight to head out to dinner at an Indian restaurant in a city I would know far better after he was gone. I set ashes adrift in a small paper boat with a sail in Blind Bay on Shaw Island where he took my daughters out to catch crab, and I spread a couple of spoonfuls at the Head of the Metolius knowing the waters that sprung from the earth there would eventually take him through Portland where we’d both been in our youth but never met.

We didn’t meet until the last third of our lives but our paths had braided across time since childhood as if we were supposed to meet often but had never quite made it to the same spot at the same instant. He was always late, damn it, but that’s probably good for all concerned and many would have had reason for concern had we teamed up in our teens or 20s before we each quit drinking.

The box came back with me to Central Oregon for the Metolius scattering and the trip to the coast last week. I thought about just sending the last of him in the box out to the waves but knew he’d object to being cast off as pollution. So I emptied a cloud of ash onto a patch of sand a wave had just washed clean and waited for the next to take him away. It took a while.

“Might be hours if the tide is going out,” he’d say, “but it’s okay,” as if it weren’t and I could have put a little more thought into this small ritual. But a long tongue of foamy ocean finally ran up the sand to lick rocks at the back of the cove and swallowed the light gray ash.

But now I had the box with plastic zipperbag and pink bubble wrap. I couldn’t just toss it into the trash in my hotel room, it had faithfully carried Jimmie for thousands of miles.

“I’m kind of done with it,” he’d have said, and we would’ve talked about our bodies as cardboard boxes with pink bubble wrap inside rolled about bags full of love and courage and ideas and dreams and lives so full we’d always want more, and then more until we were no more.

Would that I could have stolen an image from one of his favorite metaphors about wooden boats and sent him forth in the hallowed hollow of a singing violin.

Instead I brought the box back to my home and set it on rocks and then on fire in view of the mountains we’d wandered, together and alone, or with others we’d loved during the minutes we were allowed and I watched it burn until a wind sighed through the pines and spread the last of ash far and wide.