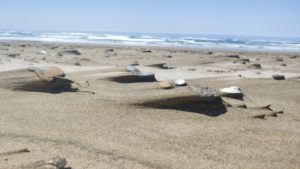 Soft sand doesn’t remember shoes, even for a moment. Footsteps down to the beach are divots.

Waves half-heartedly caress the beach hundreds of yards distant, a wide expanse of sand lies between beach grass and foam. A wave of melancholy washes to shore when I look back at trees where a beach house was to be built.

The house was a focal point for the future, but did not survive the storms of life. Let it go.

My twin daughters played under those trees as little girls, crawled along tunnels carved by rabbits out of low scrub. They were looking for the elves I told them were responsible. Rabbits would rustle away, heard but unseen, and I explained the elves could make themselves invisible, of course.

The girls are looking for jobs in the city, now. Yesterday I asked each if she was okay with my selling the lot. Each said it was not a big deal, that trips to rented beach houses are their primary memories. Their mother had asked them the same question when she sold her property next door. Let it go.

The building of a beach house was an iridescent dream of their parents, like a glass ball that  washed up along the  shore. Before I shattered it. There’s a design on my desk for this house that will never be built. I see it tucked behind a row of dark green scrub pine, on pilings, windows embracing miles of beach and years of sunsets, A short stair leads from the deck down to the path where my footsteps are already beginning to fill with sand. Let it go.

Someone asked if I’d consider selling the lot. I checked with my daughters. It didn’t matter to them, so the answer was yes. I came down to take care of legal housekeeping. I’ll use the money on other projects found and conceived as I push forward with no destination, projects that will probably be successful, if without emotional content. Success of the mind if not the heart.

I used to say I wanted to belong to someone, and yet, I’ve always run away. My ex said once that I always let go of what I want to reach for what I can’t have. She doesn’t remember saying it, so the words meant more to me than to her, and that’s an irony in itself.

We do not persist. Driving over bridges that are older than me and will be there far longer than I will be, I ask where is my religion, my nationalism, my attachment to something larger that will give me significance beyond evaporating self? Let it go.

Walking toward the ocean on a spectacular day on the Oregon coast, I find it hard to let go of a piece of indifferent land. Walking the same route back to the car, I see my earlier footsteps have already started to disappear.

Wind cuts around rocks lying on the sand, blowing support away grain by grain, until finally the rocks lean slowly forward, then tumble to a new position where the wind will sculpt another unstable pedestal.