Back to where we started 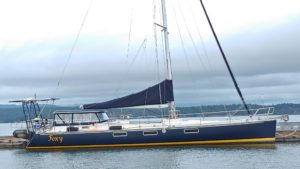 It took a few hours but Foxy is mostly ready to make the trip up the Strait of Juan de Fuca tomorrow. Leaving Victoria is melancholy, like having dinner alone in a favorite restaurant, but we’ll be back in a couple of weeks, a month, or later in the year. It’s hard to say, there are too many factors not under my control. I’m trying to focus on what I can control and adjust to outcomes that will be what they will.

I’d like to get out of here about 7 a.m., which means 8 a.m. and I have no clue why but that’s been the case for years when starting out. It’s weird, but I’m rarely late for an arrival. But if I’m going to beat what looks like pretty strong currents against us when we arrive at Guemas Channel, an early departure is a must.

Or I’ll lay over in Friday Harbor. It’s good to have a backup plan.

The tool bag is up in the cockpit, sails are uncovered, jib sheets run. No, I don’t plan on sailing and weather for tomorrow looks calm. But the sails are my back-up propulsion in case of engine failure.

My buddy Roy gave me a good lesson the day he signed me off as competent to be out there. He sent me forward to untie the sail cover when Foxy was heaving through pretty high chop. I learned it’s hard to hold on and at the same time use both hands to untie even simple knots. Some tasks are better wrapped up when it’s calm and Foxy’s tied to the dock.

Even so, I’ve probably forgotten some things and made decisions that could come back to bite me. The dinghy motor is still on Foxy’s transom. Mounting it on the dinghy is a tough job by myself — I’ve done it, which is why I know. So, while I made sure the dinghy is inflated in case I need a life boat, I’ll depend on oars if I do. Which reminds me, I need to charge up the hand-held radio because using oars in the Strait of Juan de Fuca seems just ridiculous.

But jack lines are tight from bow to cockpit, my harness and life vest are on the cushions above along with my heavy weather coat. I’ll practice with the somewhat-new radar and the Automatic Identification System tonight, though I doubt the radar will be required. Still, better to have a handle on it.

It’s been five months since Foxy’s been off the dock. This is our first trip of 2020. It’s not far — we (that would be Foxy and me) are just headed back to friends at Marine Servicenter in Anacortes where she was recommissioned four years ago. Or was it five? She needs another couple coats of anti-foul paint on her hull, we’ll grease and check the Maxprop, enlarge a through-hull for a new water speed sensor. Maybe reroute some plumbing. Maintenance that can only be done on the hard.

Then we’ll splash and either head back to Victoria or maybe just to the buoy at Friday Harbor. Wherever we are on the water, that will be home for at least as long as we’re there.

4 Responses to Back to where we started