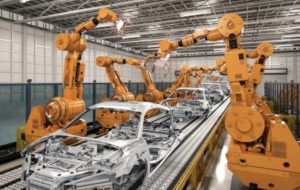 Office Depot put my local stationary store out of business, then the men’s store downtown that carried shirts I liked closed their doors because of the new mall. And there is always Walmart. Capitalism may be efficient and creative, but has some serious side effects.

I think of myself as a capitalist (and a liberal, but those are not really incompatible). But I worry that unintended consequences of unfettered capitalism may harm “we the people” it ostensibly serves. Since we’ve given the rights of “personhood” to corporations, perhaps we’re the servants.

Lower costs certainly benefit consumers. The savings may come from efficiency gains and purchasing power. I love Costco, but it’s instructive to listen to companies that sell to that big-box giant. Walmart sells t-shirts made so cheaply in China that consumers in America, at least those who still have jobs, can buy new ones whenever they want. That does not include out-of-work textile workers in Alabama.

Amazon sells for less by eliminating the cost of brick and mortar stores. Of course, I can no longer go in and feel if a product is well made, but I can always return it with the cost carried by the seller. They may lose money, but they have no choice because Amazon has become the market place. If a seller is not there, they’re nowhere.

Wealth and profit are driving forces of capitalism, and are not dirty words. But when profit is the primary motive of company leaders, and a higher stock price rewards executives who cut costs by stepping on workers and buying back shares, then capitalism can lead to wide-scale destruction of value, and often of corporate values. See Boeing, 737 Max.

Why does VISA own our money, charging the businesses we buy from a couple of percent off the top and setting us up to fail so they can charge usurious interest on underpayments when we get in a jam? Of course credit cards are convenient, and possibly cleaner as we consider coronavirus, but what is the true cost of VISA to national productivity? Would it be wise to bring money back under national control?

The “free market” does not serve us well when it comes to health care.  Proof is easily found by anyone who cares. I won’t waste effort defending the statement.

These trends will accelerate, and hardship become worse, when Amazon buys Tesla robot semi trucks to move goods, further reducing Amazon’s cost by eliminating truckers, one of the last sorta kinda well-paying jobs for the undereducated. Then all those truck stop cafes will close, putting all the Serving Shirley’s and Grillin’ Gary’s out of work, too. Then the companies that provide the pre-prepared chicken fried steaks, and frozen blackberry pies.

Car manufacturing is increasingly done by robots, as recent photos of factory floors and employment numbers from Michigan have shown. It’s not just that jobs are going to Mexico, though they have, but it will be even worse when we start importing electric cars from China made by robots built in Germany. Even logging in my home town uses huge cutter/buncher machines that do the work of seven or nine men with only a crew of three.

So capitalism may lowers costs (unless there’s a monopoly, or collusion in the market to keep prices high — see AT&T, Verizon), but when the primary cost is labor, that means jobs are lost. Politicians owned by corporations sell it as “freedom” in the “free market” and giving people the “freedom to choose.” Capitalists say, “… the unemployed should retrain for jobs that are in demand.”

Okay, maybe some of those unemployed loggers will retrain and get a comparable job writing software. Maybe they can go into real estate. By the way, thanks for cutting funds for their education and health care while they’re out of work, and for making student loans unassailable so those with dreams can live in servitude for decades after getting a worthless degree from Trump Chump U.

Of course many give up. Change is happening so quickly now, retraining for most is a pipe dream. So pass that pipe, because “worrying about all this shit aint getting me nowhere when there aren’t no jobs in the first place, and big business has bought all the companies that used to pay a living wage.”

So perhaps there’s an element of self destruction in the creative destruction of capitalism. After all, workers who are getting squeezed are also consumers that power 60 percent of the economy. At some point, would it be wise to consider the total impact of individual decisions, and protect the system that supports all of us? Might that be the role of government?

Ultimately, we’ll also have to confront the question of our indvidual value in this brave new world. Traditionally our value, to ourselves, to our families, to our society, was measured at least partially in terms of our work. That’s different than our value to the market, defined by capitalists who manipulate our consumption, which is primarily as a consumer.

What happens to our “value” when we no longer have a job, and not enough money to consume?