Owning our own time 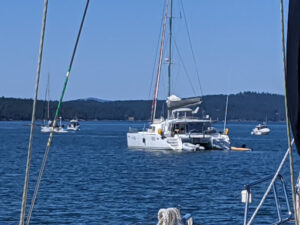 Just now on channel 16  a man said, “White sailboat with blue stripe near the entrance to Roche Harbor, you are approaching a pod of orca. Stop your boat.”

After about 20 seconds, a woman came on the radio and said, “Thank you for the alert. Our engines are off.” Or something similar. It’s nice hearing sailors (power or sail) sharing respect for these truly magical creatures.

Since I left the entrance to Roche Harbor about four hours ago, I was disappointed not to have been there to see the orca. But I’ve seen them up close in Alaska and will treasure that memory until I create another.

Arrived in Blind Bay about noon or so, I really don’t keep track of time when on the boat. Okay, I don’t really keep track of time at all, anymore. There’s a certain timelessness at this age I didn’t have for most of my life. I was born impatient. Glad I’ve mostly recovered.

Jimmy told me once, when we were on his boat in Panama, that one of the things he treasured most about cruising with Leslee on their boat was that “I own my own time.”

Incredibly able and creative, he may have been the only person I ever knew who was born even more impatient than me. He hid it better though, behind a habit of being just a little late for whatever was most important on his schedule. I named  the inevitable chaos that resulted after them, which I don’t think he appreciated partly because it was so spot on.

Leslee said we were brothers of different mothers. I miss him every day. There’s a certain timelessness to that, too.

There’s no reason to put down the crab pot. The season won’t open again until Thursday, when I’ll be back in the truck heading south to Oregon, to tasks and paperwork, clocks and calendars, and smoke from forest fires.

Maybe I should drop the dinghy back into the water regardless, but I don’t know that I’ll need to go anywhere. That depends on what Karen and Joe want to do when they get here in their wonderful Swedish boat, Zephyr.

I have fresh mussels and clams to steam up for appetizers. regardless. I hope they have butter. Maybe I should drop the dinghy and motor over to the tiny store at the ferry landing on Shaw Island. I could get a bottle of Talking Rain while I’m there.

Ah, I have to drop the dinghy in any case, it blocks the only easy way to get on board. As good as reason as any. Maybe I’ll motor over to see that catamaran a couple hundred yards away.