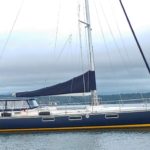 The other evening over dinner, my daughter K.C. asked why all the sailing magazines scatted around my house showed “older white people” in ads for boats.

“Is that because those are the people who have jobs where they can afford those boats? Would it be good to show people with brown skin like me (she is of East Indian heritage) in the ads?”

Since I published a small newspaper for most of my adult life, I explained that advertising costs money, advertisers wanted to aim their ads at those most likely to buy the product. Yes, demographically, older white people are more likely to have the income to buy boats. It’s just business.

It took a few days, but I have a lot of barnacles to grind off. K.C. supplied the grit.

To what extent do visual images in ads not just attract the target audience, but also create a negative landscape for others? Do ads aimed at upper income whites also convey the message, “This is not for you” to lower income, non-whites? How deep does it go? “You can’t achieve this?”

I think what K.C. was getting at is that there are many thumbs on the scale of injustice, some of which we don’t even see, at least if we have no reason to look.