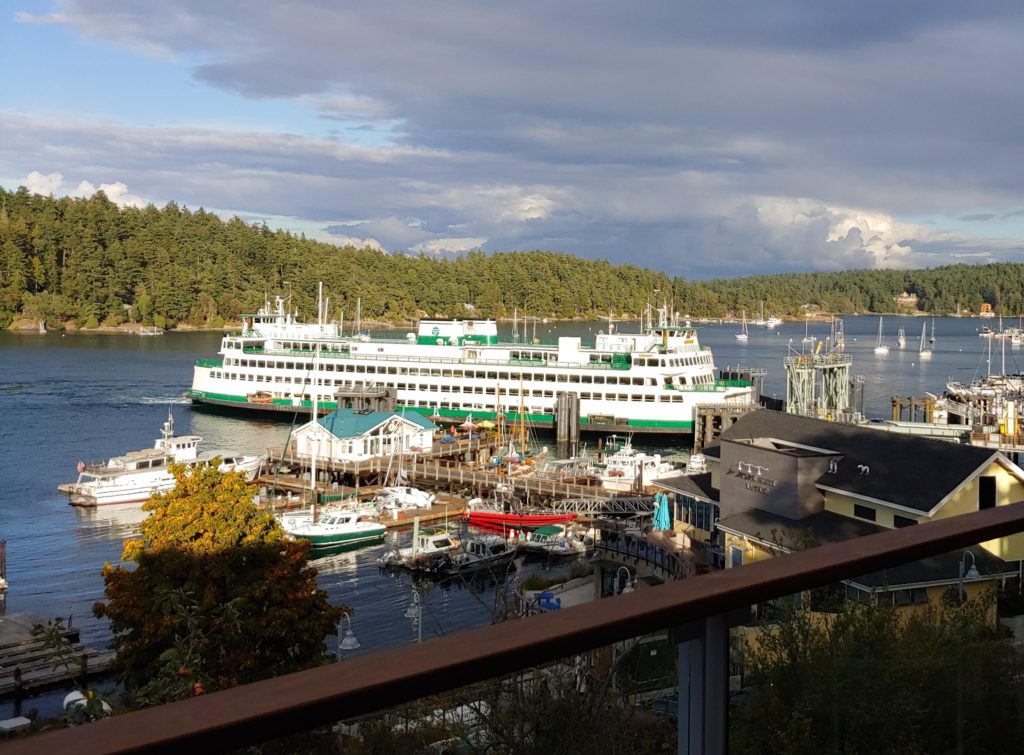 Lars was leaning on the rail at the top of the ramp, gazing out at the water below. Bandit, a small and alert Australian Shepherd lay at his feet watching another dog approach from the parking lot above, a larger dog at the end of a leash held by a woman carrying groceries.

“You look like you’re trying to decide something,” said a man dressed all in black who came from the direction of town, a backpack on his shoulders. The man with the pack bent down and rubbed Bandit’s ears.

“Hi, Bandit,” he said. The dog stood at mention of his name by this man he had seemingly met before, but didn’t take his eyes off the other dog that was sniffing rocks where dogs peed on their way to and from boats packed side by side in their berths.

“Wondering if I should go to Alaska,” said Lars, his face rudy and unshaven, his hair thick, reddish and gray, the beard long and sparse. “Get me some kings.”

“It’s been a bad year for king salmon,” said the man dressed in black. “Even the Orca can’t find them.” The huge mammals that were totem for the western edge of Canada and the Pacific Northwest were starving. Nobody knew where the king salmon had gone, whether the absence was caused by dams, over fishing, global warming, foreign fleets depleting the resource far out at sea. Many theories, few answers. The story of a female that had carried her dead calf for 17 days made world wide news.

“Yeah, it’s been a bad one. The prices for a permit are down to half what they were just a couple of years ago. Lot of men have given up. Maybe I can get one cheap,” said Lars.

He moved his feet without standing or shifting his considerable weight from the rail. His right foot came forward to carry more of the load, his left foot went back to take some off. He switched hands, too. His hands were huge, reddish too and scarred, but looking as if they could grab and tie without effort the three-inch hawsers that held ferries in place at the landing.

“It’s a little late in the season,” said the man with the backpack.

“Well, yeah, not now. But later. I need to eat some kings. Get healthy.”

“Was until six months ago. Felt great. Bought that boat,” Lars pointed by raising his chin toward a small troller tied to a dock where the bull rail was painted yellow, signifying that was not a place to tie up.

The dog with woman with groceries was about even with where the two men stood. Not making a sound, Bandit darted out toward the other dog but stopped after about two feet, well before the end of his own tether. The larger dog, startled, spun, barking with fear and aggression. He lunged, nearly pulling his owner down, but she retained both dog and grocery bag.

The woman, who had not seen Bandit’s feint, yanked hard at her dog’s leash, scolded him harshly and hauled him down the dock. Bandit, mission complete, had already turned to lie again at Lars’s feet before they’d taken five steps.

The man with the backpack laughed loudly. “Bandit, you set him up! You were just yankin’ that dog around!” he said to the Australian Shepherd, who looked for all the world like he was pleased as could be with his prank.

“So what happened six months ago?” the man asked Lars.

“Doctors said I had two strokes. And cancer. They tell me there’s not much they can do.”

“I just need to eat some kings, not all the garbage they sell in packages up at the store.”

The two men looked out over the harbor as a green and white ferry came in the harbor entrance, three decks high, the bottom lined with cars and motor homes and trucks. Bandit was looking the other way, as if for another victim.

“You have family?” asked the man with a pack.

“Got a son. Lives in New York. He prefers city life.”

“Have you told him?”

“Nah. He wouldn’t want to come back here. He was raised here, but he likes the city. He works in a restaurant, I don’t know. Wants to be a writer. He’s living with some woman whose uncle or something is into the publishing.”

“You know, before they told me about all this, the cancer and all, I felt great. Now they keep saying that I can’t do this and I can’t do that and I feel awful all the time, barely make it up the ramp some days. If they wouldn’t just say the same thing over and over again, I could get well maybe, and if I had something decent to eat.”

“Is there a food share in town? Something from the government or the churches?” the man asked.

“Oh yeah, there is, for those folks who need it. I’m not so good at asking for a hand out.”

“Maybe you need it just for a while, to get you by.”

“I don’t need much,” said Lars. “Not like I’m starving.” At that he leaned back a bit and nodded at his sizable belly pushing out beneath a faded and not too clean sweater. On top of that he wore a black quilted vest that would supply some warmth without binding the arms of a working man. He wore sweatpants, a concession to the difficulty he was having bending and moving around. On his feet, worn out work boots of high quality that he’d had as long as he could remember and would probably last forever.

“I don’t have any bills. I just need some good food. If I could get some kings, I think I’d get better. I lived on a farm once, on a creek not far from here. Kings would come up that creek and I could almost pick’em up with my hands. I didn’t take more than I needed, either.”

Lars seemed to be making his case to the God of Salmon that since he hadn’t taken more than his share, perhaps a little could be returned now in his time of need.

“How old are you,” asked the man dressed in black with a backpack and silver hair who wasn’t wearing a coat despite the chill air, and it looked like he’d just finished a run.

“Sixty-five,” said Lars, looking the man in the eye as if waiting for him to say that Lars looked pretty good for a man that age. He didn’t.

“You aren’t leaving for Alaska in November,” said the man.

“Nah. Well I could, head up the inside.” Inside is behind islands that guard the North American continent from the often violent northern Pacific sending storms that build all the way from Asia. Starting at Vancouver Island, one can get deep into Alaska with only a couple of stretches exposed to the open ocean.

One can wait for benign winds and water to cross those. But the bays and passages and channels are still lethal if things go wrong. Survival longer than five minutes is unlikely in the cold water.

“You could,” said the man, again bending down to rub Bandit behind the ears. The dog put his nose to the man’s nose and held it there, as if they were sharing whispers. The black of Bandit’s long healthy coat was the same black as the man’s sleeve; it was impossible to tell where one ended and the other began.

“You know, there might be a way,” said the man, standing.

“Way for what?” asked Lars, settled back on the rail as if he were merging with the wood.

“What do you need? Full tank of fuel, provisions for six months?”

“Not even six,” said Lars. “I’d catch kings to eat, crab and bottom fish, too if I couldn’t catch kings. I wouldn’t fish every day if I didn’t need to, but could if I did.”

“Yeah. If you needed to,” said the man. “We could set that up, you could leave in a few days. Write up what you need, I’ll bring it to the boat. We’ll fill your tanks with fuel, water. You can take off as soon as you want.”

Lars didn’t say anything, but he looked at the man who now had the backpack in his right hand, and who looked back and held Lars’ gaze.

“You leave Bandit with me.”

Lars looked down at the dog at his feet. The dog looked back at him, into him, aware of his man’s deep distress though not a word had been said.

“Why that? You could get your own dog for a lot less.”

“Yes I could, Lars. But it’s not about just having a dog, or any dog.”

“What is it then?” His voice was quicker and louder than it had been at any point in the conversation, motivated either by opportunity or fear it was impossible to say.

“What is that, exactly?”

“We must all move forward, Lars, but it’s easy to get stuck. I unstick people, help them make decisions or decide for them if they can’t.”

“You work for the state?” Lars asked, which caused the man to explode with laughter. He laughed so hard he couldn’t speak for a long time.

“I’m going to share that one with friends,” was all he said when finished.

Lars then gathered himself and stood, pushed himself up with his hands and arms, until his back was straight for the first time. At full height he stood easily a head and a half above the man with a backpack who was dressed in black. Lars looked every inch the son of the norsemen from whom he descended, a Viking, in rags but proud, blue eyes alive.

“No. I raised him. We’re together now, and will be until we can’t be.” Lars bent down and gently put his huge hand, it looked like it could wrap all the way around, on Bandit’s head. The dog stood immediately, knowing they were off together to wherever their journey might lead.

“We’re going to get something to eat. Then I think I’ll call my son.”

Lars slowly made his way down the ramp, toward the small troller tied where it shouldn’t be at the dock. He was headed home. The man in black carrying a backpack smiled as Bandit frequently paused, waiting for Lars to take each difficult step.