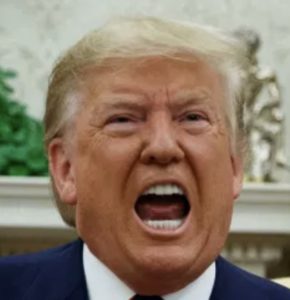 Shut up! Just shut up, you Cheeto-colored, fat-headed blowhard! Shut up and quit using coronavirus updates to put your ineptitude on display, as if you were proud of it like a five-year-old holding up a drawing done in kindergarten. You are embarrassing America.

Your ignorance, your cluelessness, your egotistical grandstanding, your obvious floundering, are making the Pretend President Show painful to watch. And dangerous. More popular than “The Bachelor,” you say? Bigger audience than “Monday Night Football?” Are you kidding me? What kind of inane, insane monster are you? Turn it off.

Shut up, because we all know English is a foreign language to you, and that you’ve never been that bright, and that adults who still monitor your White House play pen should talk directly to America about the virus. I don’t mean Pence, either, that mealy-mouthed lick-spittle.

Shut up about your “perfect” early response to the virus, about how you prevented diease carriers from coming in from China, because  the virus was already here! People in the White House knew it! Shut up about the World Health Organization too, because for all their faults, they did a better job than YOU.

Shut up about “liberating Michigan,” after you turned virus response over to governors who are making agonizing decisions every damn day. Shut up about disapproving the opening of Georgia for business after you suggested they do exactly that! God, you are such an asshole.

Shut up about your greatness in testing, you pouting, soft-lip scum sucking incompetent, because it’s not true. Testing? We would be testing ourselves but there isn’t an oxymeter to be found in Oregon, nor a bottle of disinfectant, by the way. Why not? Why aren’t there gallons of alcohol disinfectant for sale in every damn drug store in the nation? Because that is clearly something you could do, if you’d stop putting it in our gasoline.

Shut up about your miracle cures, because they aren’t real and YOU ARE KILLING PEOPLE with your ignorance. You have the power of the U.S. government at your fingertips, and you promote bullshit from Rudy Gulianni? Just shut up.

Shut up about how great it’s going to be, real soon, because we are still mourning loved ones we have lost, more deaths to the virus than anywhere in the world, including CHINA!

You don’t think it’s that bad? How many friends have you lost to the virus, how many relatives? None?

Maybe that’s because you are just better than the rest of us, cleaner, more virtuous, you pig-faced grifter, you fake businessman, you shill, you flatulence-exhaling con man. Or, maybe you haven’t lost anyone, and maybe you don’t worry about disinfectant or tests or deaths, beause you live in a bubble of gold plated bathroom fixtures cleaned by servants after every crap you take.

Maybe you don’t care because you don’t have to, and you never did, you silver-spoon-fed pile of twisted  lies, damaged ego and disgusting selfishness.

So just shut up.