Who knows why it was today?  Because I wasn’t adequately sad, what with a firm, final goodbye from someone I loved but hurt badly enough they’d finally had enough? Because 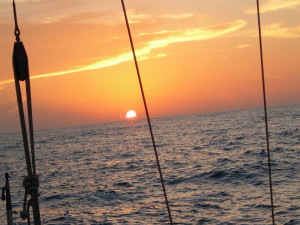 the sun was out? Because it was today, it just was?

This was always going to be one of the places where I’d leave some ashes. It was a crisp lovely day long ago when Leslee and Jim and I leaned up against the tall stone wall that retained heat from a sun that would not set.

We marveled how it just hung there barely moving as crowds flowed by and musicians played for change dropped into guitar cases, the sun perpetuating the afternoon like the singer held on to a refrain of a song we really liked.

On that day we were on the island looking at a boat I thought I might buy. I needed their opinion, we shared values and they had far more experience. After thoroughly going over the boat in a marina 45 minutes to the north, we came downtown to bask against the wall in this exquisite city, then find some Indian food.

I didn’t know on that afternoon, what, five years ago? Six? how little time was left. So much has happened since, and it’s hard to think that Jimmy died coming up on two years ago. Hell, I think I’ve been boating around the San Juan Islands for well over a year with the box Leslee sent with Jimmy in a baggie. Maybe that horrifies some, I think he’d smile, hell, he might have just given me those words.

The time wasn’t right, until today.

God, I miss him. Not like Leslee, of course, or his sons or his grandchildren. But he was my older brother, I trusted him to be him, and I loved him as if we’d spent our whole lives together and not just part of the last half, and even though I always knew he was smarter than me, more compassionate, had higher standards, had achieved more, showed higher honor.

It was hard at times knowing I wasn’t his best friend even though he was mine, that I may not have even been in his top five. He was that loved by those kinds of people. Of course he was. He had an impact, he was, it was frequently said, “larger than life.” Many wanted to bask in that glow.

He could tell stories that would make him laugh so hard he could barely speak, about things he’d done that most would want no one to know. Like the time he ate a bad taco or whatever from a street vendor in some South American or Central American town, then had to get on an airplane for a long flight back to the U.S. About how, when he got off the plane, men in hazmat suits came on board.

I helped him at times, I think, I hope, when he would worry about things. He didn’t know why he procrastinated when a legal brief was due, usually getting it done at the last minute. “Because your subconscious works on it the whole time, until you’re ready to transcribe the ‘story,’ ” I told him. That seemed to give him some relief from self recrimination.

He was a master at story. When writing a brief, he could put the facts into a story that was so persuasive, he had a reputation. He wrote simply but beautifully, better than me, and I was suposedly a “writer.” He’d clerked for one of the top legal minds in Oregon. He was qualified to present arguments to the U.S. Supreme Court. He wrote passages that were incorporated into U.S. law. He fended for the downtrodden, literally saved family farms, shook hands with Willie Nelson.

No, he wasn’t perfect but I loved him as much for his flaws as all that, for his occasional self-doubt, his deep need to know where Leslee was at all times and his dependence on her, his propensity to forget on occasion that he’d told a story before.

Like all of us, he had a warped mirror, at times. Others called him arrogant, not recognizing the difference between arrogance and brilliance and a willingness to express what he knew to be true.

Those attitudes didn’t bother me. I’ve been called arrogant as often as he was, and I have a whole lot less to show for it. It was confidence in some situations, managing not to show insecurities in others.

We’d hang out, sometimes talking deep shit because that was my personality refuge, until he tired of that then would change the subject or go do something else. In Panama once they’d broken the glass on a solar panel. I suggested we cover the shards with epoxy, and we filled the frame with a gelatinous goo that hardened into a glazing that worked well for a while. He thought that was pretty cool.

He loved his own kludges, too, like the time he rewired the automatic control of the water maker on their boat so it operated manually. That fix got them by for a long time, and took some ingenuity to figure out. I think he talked about that more than fighting off banks who wanted to take family farms in the 1980 recession that nobody remembers any more.

I think I’ll leave some ashes in Blind Bay, where he and Leslee watched me bring the boat he helped me buy and drop anchor for the first time, where he called my daughter the “crab whisperer” and made her proud that she could coax claw waving crabs to let go of the cage so they could be dropped back into the bay or into the pot for dinner.

Maybe I’ll make a small boat of folded paper with a candle for a sail and send some ashes off. Maybe I’ll send some down in a crab pot to lure the beasties in. I think he’d think that was fun.

This is the second time I’ve taken ashes to special places. The first time was for my other older brother from a separate mother, Jeff, another brilliant man but one so haunted by the demons we shared that … well, never mind. Some of his ashes were spread in a large Montana Lake, left there as the first snow of the season settled in and roads were about to be closed, so that Jeff could join creeks feeding Flathead Lake and eventually the Columbia River and out to the Pacific Ocean.

Which is where Jimmy’s ashes will wash, the next rain, off the huge stones that make up the wall where the sun sets only with reluctance. Off the bow of my boat, too, where I spread some so that Jimmy could continue to guide me, from a place ahead of the mast.

I’m getting old, but I often think of myself as Jimmy’s little brother. I refuse, as Clint Eastwood says, “to let the old man in.” The day will come when I can’t drive fast cars and sail this boat and maybe I’m already incapable of falling in love. I had to face that again, yesterday, when I read the word, “goodbye.”

Maybe today was the day I spread a bit of ashes because it was a way of not saying goodbye. I put ashes in a place important that I’d shared with him, with them, so that every day for however long I spend here, when I walk past that wall for whatever reason, I will be able to say, “Hi, Jimmy.”

Even if no one hears me.