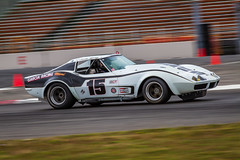 Weather for the Columbia River Classic car race in Portland was appropriately British. The event was paired with a large collection of Mini’s, MG’s, old Rovers, Jaguars, part of the All-British Field Meet. Dark gray clouds rolled over the city, threatening to dump rain by the barrel.

A lot of us in the big engine cars don’t like racing in the rain. Yes, we do know that the best racers shine brightest when the track is wet, but the risk / reward ratio for us is a little high with all that torque. It’s not like we’re 20 something and invincible, or racing on somebody else’s dollar. Plus, parts get tired over a season, and little things ignored tend to mount up. There are big races later in the fall, investments you have to prepare for.

Swede’s paddock wasn’t there, which meant that Falcon, Canuck, and BlueZen were out, either saving themselves for a national race in Texas or just done for the season.

Cowboy’s Corvette was without an engine, something locked up his sump pump at the last race in July and the engine was not back from the builder. Ceegar did not come down from Seattle, and there were rumors that he may be done, the fun gone out of racing because he was tired of being punished for things on the track he didn’t do, and tired of seeing others, meaning Team Cobra, not being punished for what they did.

I asked around. In fact, the Team Cobra driver, Snake, received a 13 month probation for aggressive driving from SOVREN during the Pacific Northwest Historics in Seattle, which was shared with groups that the Seattle organization affiliates with. If there is an infraction in that period of time, they will immediately be put on the trailer for that event and face further consequences.

This whole thing is a little weird, from my point of view. Ceegar and Snake have both ruffled feathers with their driving style, partly because they are the most aggressive drivers out there in our bush league racing. Certainly, Snake is the more aggressive of the two. The two best races I’ve ever run were against one of them or the other, and both times I came in second.

I really hope Ceegar comes back, and so does everybody else. I don’t think he knows how we value his contributions to the sport and to the charities we support. SOVREN has flowed millions of dollars to the Seattle Children’s Hospital, even before a $60 million bequest from the estate of Bruce Leven, a racer of legend known for his occasionally over the top aggressive racing. Leven hit every racer I know at least once, me twice. I probably deserved it.

Ceegar is more subtle, but very important to our dying sport. Plus, he’s fun.

I started at the back of the pack in the race late Saturday afternoon, because we missed the previous race altogether. Mule, my mechanic, had topped off my oil twice while preparing the car back at his shop, once more than needed.

Saturday morning, the overfill pushed at least a quart out and onto the nose of Mr. Polished’s Corvette right behind me, rude and dangerous. There wasn’t much time between the morning race and the first race on Saturday afternoon. We didn’t get the excess drained in time — Mule also works on the three Polished family Corvettes. To his credit, I suppose, Mule had warned me earlier in the season he might not be as available at the track as he used to be. I’m hoping that gig works out for him. On Saturday, it meant that we started last in the final race of the day.

Coming into Turn 7, in second gear and foot easing into the brakes, I was setting the car up for turn exit, at the limit of traction, ready to power down and run like hell to Turn 8.

Then YellowJacket went lifeless. She had popped out of gear into neutral, coasted into the turn with the engine at little more than idle.

At that point I stopped setting up to get through the turn, stepped on the clutch, shifted back into second (Yes, I could and probably should have just matched revs and pulled back on the stick, but I don’t like the sound it makes if that goes wrong), steered with one hand and tried to find the sweet place between traction, driving line, and acceleration.

In about a half second.

I didn’t quite make it. YellowJacket pushed right through the turn and out onto the grass, losing all the ground I’d gained coming up through the pack like a banshee with attitude, trying to catch Mr. Polished. I checked my mirrors, waited for a good moment of reentry. It was not fun, limping along with a transmission that randomly decided if it would stay in second gear. Aside from causing the one off-track excursion, there was a loss of the confidence needed to take things closer to the edge, which is where I like it.

And it was my fault, going for a few years on a crucial part which should be refreshed every year. I spent more on the failed weekend than I saved by putting off the rebuild.

I decided not to run on Sunday. Even though the weather cleared up for the morning race, a good portion of the field had gone home. Some friends, family really, were going through some personal turmoil. My head wasn’t into the game, and this is not a sport for the distracted.

So, I sat in the stands and enjoyed watching Ms. Polished win her first race of 2019, overwhelming a Porsche in the final two laps for an exciting and well deserved victory. For this weekend, at least, that was enough.