The SVRA race in Portland is already something of a blur. I should have taken notes, but sometimes life itself feels like driving through a rush hour on a six-lane highway capable of funneling cars at 70 o 80 miles an hour but regulated to 60, the shear volume of traffic reducing speeds to 30, then 20, then 10, and now zero, inching along, 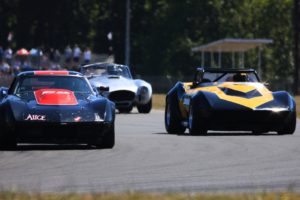 Three in the lead. Photo by Austin Bradshaw, flyingbyephoto.com

unable to get off, unable to do anything besides sit there, barely moving and barely conscious except for awareness that hours of life are being lost that will never be regained.

I didn’t know then I was already showing symptoms of a bug that would dog me all weekend, and lay me low in five days. It didn’t affect my racing, I don’t think, just my attitude. Of course, I’ve always hated rush hour.

Conditions at the track were nearly perfect when I finally arrived after a four hour haul that should have been less than three. Jakester was waiting, it was his birthday. He was turning 19.

He’s been my crew chief since he was 14, when his mother signed a piece of paper that would allow me to authorize medical care if something happened when we were at Road America in Wisconsin, or in Spokane. Everyone who knows me has laughed aloud about her decision. Me too. Looking back, her trust wasn’t misplaced, but seriously, who would do that?

But Jakester is an old soul, and I can’t even really say that he’s changed that much since he was 12, when I showed him how to torque wheels. I suppose trust goes both ways. Who would trust a 12 year old to torque wheels on a car built to go 160 miles an hour?

Anyway, it was his 19th birthday on Thursday and when I got to the track, he invited me to join his family for pizza that evening.

Mule was ticked off when I got there because the officials weren’t going to let me park across from Mr. & Mrs. Polished, making it more difficult for Mule to work on their cars and mine. When I parked where officials told me to go, Mule told me he was “disappointed” I had not argued with them more, and if something broke, it might not get fixed until evening.

We had a short, intense conversation about that. We got it resolved, but not without a feather out of place. It was really over the next morning, when the same official came over to say that a space had opened up right across from the Polished operation. I moved the trailer.

At one point Kiwi came over. He’s built a number of very fast cars, including those of Family Man, the most improved racer in our group, by far. Kiwi’s operation has grown considerably over the last five years, maybe longer.

Kiwi had seen my concerns about the ever increasing speeds we’re touching in these 50 year-old machines.

“I agree, even though I benefit from the checks written,” he said. Kiwi thought adding weight would be a good way to slow things down, make the field more competitive, anyway, with additional weight being added to cars that were exceptionally fast. A type of handicapping.  Kiwi has a lot more experience and knowledge than I’ll ever have.

I went over to talk to the drivers  in Swede’s paddock at one point, to get their opinion. Falcon siad he’d been involved in discussions years ago about the same topic. “I was told back then to not let the Corvettes have big tires,” he said.

But it’s not just the Corvettes. I followed Falcon down the main straight in Seattle at the beginning of July and watched him spin right in front of me, going sideways at 130 mph. I’d not been able to pass him with a considerably larger engine. That said, tire limitations might work.

No one wanted to return to rules enforcing wet sumps or solid lifters, though, engine technology from the past. Blown engines are expensive, and oil spread across the track can be pretty dangerous as well.

Oh. The racing? It should have been a better race than it was, at least viewed from my paddock. Ceegar had taken his grandson fishing in Alaska, but Kanuck had brought Alice, the storied black and red Dick Bech car, raised from the dead with few dollars left unspent on the rebuild. Swede did a beautiful job on that car for Kanuck, and Kanuck is one of the best drivers out there. He was the only one likely to give Snake and Team Cobra a run for it, unless I could find game that’s been out of reach this season.

The Cobra had pulled out of the race on Saturday afternoon. They said it was a wheel bearing. I thought I saw engine smoke. They quickly covered the car and took it off track for repair. So, in the final race on Sunday, Kanuck and I started out hot, and I thought I might have a chance of a victory when he pulled off the track with a mechanical. Still, I knew the Cobra would be coming up through the pack with intent and finesse. Starting from the back and winning  a race is not impossible in this group. I’d done it myself a few times.

The Cobra was right on my tail coming into Turn 7. I knew he’d probably pass me on this lap, but was trying to stay to the inside so I could at least turn it into a drag race down the back straight. Suddenly there was a minor explosion behind my seat, then a pretty ugly grinding noise. I had, again, blown up the gears in the rear end. Even though I’d been trying to be careful with my shifts, it’s just too much engine and too much tire for 50 year-old gear design. Or, maybe I try to use them too long, and should be rebuilding them every winter, looking for cracks or chips in the finely machined surfaces.

I limped the car behind the barrier so I would’t cause a yellow flag and ruin the race for everyone else. That was probably an expensive decision, since forcing all the pieces to do their job for another 50 yards destroyed any part of the rear end not already ruined. They brought me in on a flat tow, back of the car in the air.

The Cobra won, again. And deserved to, facing down their own mechanical issues over the weekend. Give credit not just to Snake, but to car owner Mitchell, for putting together a dominating team effort. I wish I’d been able to make them work a little harder for it, and that Kanuck had not broken and been able to stay close. But Team Cobra has dominated the racing this season, and set a track record at Portland. We’ll have another chance.

Maybe they’ll be back after Labor Day. Mule called me up last week and said Yellowjacket has a new rear end and is ready to race. Jakester has left no doubt that he’s ready to do what it takes to keep us near the front. Plus, I bought a set of tires from Cowboy for that last go in Portland and didn’t get to put many laps on them before the rear end let go. Tires don’t age well, and won’t be as good next year.

So, even though I’ll be coming to the Portland track right from the boat, a vehicle where 11 mph is a pretty good clip, and which will hopefully be in Canada, we’ll be at the Columbia River Classic in a few weeks. The Dentist, a friend about my age, is retiring from racing this year. He said the fire doesn’t burn as hot, and there’s not really anything to prove. He’s one of several who’s moving on. The racing grid gets smaller every year, and there are fewer people in the stands. Enthusiasm dwindles not just for these old cars, it seems, but for the love of speed, the sensation of power, appreciati0n of the skills, the thrill of danger.

But we’ll go again in a few weeks because what we’ve done so far hasn’t yet filled the bucket.  We havent had quite enough.