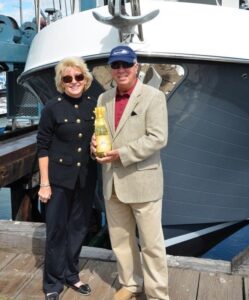 It’s just weird. News arrived today that I’d lost a friend. I knew him for less than three months and yet, a fog of sadness lays thick about.

We met while traveling together but separately to Alaska. He and his wife Connie, she the epitome of graciousness, motored in their tall and broad-shouldered powerboat “Lori Lee” with frequent guests; Jane and I slipped along aboard my long and thin sailboat, Foxy.

The list of differences is much, much longer than any list of what we had in common. He was the quintessential Southern Gentleman from Alabama, while I grew up an Oregon Boy much in need of refinement. He was a builder who created an empire, first by laying bricks, if memory serves, eventually building hospitals. I just push sentences to their breaking point, endlessly polishing ideas. Grady and Connie were devout Christians who shared their deep faith in the Bible, while my study of religious philosophies led me to distill truths I found in all of them. He was “conservative,” I am “liberal.”

And yet, we became friends, even while disagreeing about almost everything except catching salmon. Oh, sure, there was evangelism involved, an attempt to save my soul. But then, Grady asked me once what to do about a loved one who had fallen into a relationship with drugs. We were both shocked that my recommendation, though wrapped in a message of acceptance and love, was so tough: “Anything you do to mitigate the consequences delays the first day of recovery.”

And the time, when pressed to accept the Word of God, I told Connie that while I did not share her faith, I had the utmost respect, if not envy, for what their faith had given them.

When we disagreed, Grady listened to my point of view and tried to address it honestly. I tried to get behind the curtain woven of words and assumptions, and find what was illuminating his opinion.

Often, it was futile. Even if we agreed on root cause, we disagreed on solution. But there was always a shared respect, and a desire, I think, to find a common ground we could walk upon.

Grady and Connie sold their boat early this year, a difficult admission that they had already made their last trip to Alaska. Connie’s health had not been great, and now, Grady has died three weeks after being diagnosed with pancreatic cancer.

As a good-bye gift, Grady leaves me with the question of why we were able to communicate so well, from such different points of view, when those with whom I share values and life experiences seem completely out of reach, brothers with nothing to say. I’ll probably never know.

But thank you, Grady Sparks, for time spent in the cockpit or salon of Lori Lee, exploring different views within shared mutual respect. You allowed me to experience your sense of loss for an America I never knew. You will be missed.

The new tire combination, rubber from earlier this year and late last year, worked well in practice this morning.

Qualifying started at 10:30. I was warmed up, Yellow Jacket was warmed up. We were flying right along, I had just gotten by Kallberg and was accelerating out of turn 2 when there was a “BAM!” and I lost power. The engine revved freely but was not turning the wheels. I drifted down through the hairpin of Turn 3A and pulled off at the turn station, scrambled up to the safety shed.

They towed me back to the pits at about 11 a.m. I told Jeff Taylor I thought the the clutch had let go, maybe the transmission. I crawled under the car and started turning shafts and tires. The transmission sounded like it was chewing on beer bottles.

With a new engine, and a new clutch, we found the new weak link.

Three or four years ago, I sold my back-up transmission to Dave Edelstein. Dave sold it to Jeff and Jerry Taylor. The Taylors used it, took it out of one of their cars, rebuilt it and sold it back to Edelstein. Today, he offered it to me.

Jerry from Colorado had offered to let me use his back-up transmission, gratis, for the weekend. Tom Cantrell had three or four in his trailer, and offered me one of those. Humbling, this competition.

And then Edelstein asked if his mechanic, Ken, could help me out. Ken and Jeff Taylor dove under my car. The two of them hauled out the old gear box, put the new one in. I brought them tools and unhooked the shifter from above, filled the new tranny with gear oil. By 2 p.m., the job was done. At 2:30 we were back on the track.

I hadn’t realized until then that the old transmission was so bad.The newly rebuilt one shifts so much more smoothly. I took back to Kallberg the new set of tires he sold to me for this race, since a transmission breaks the budget.  The old skins were working fairly well, they’ll have to do.

They worked well enough that Kunicki, starting from the back, ended up in fourth, and I ended up in fifth. Edelstein is two spots behind behind me. Kallberg is still fighting mechanical gremlins.

And because of the help of friends, this weekend is not yet over.